Bridges of transition...What are yours? 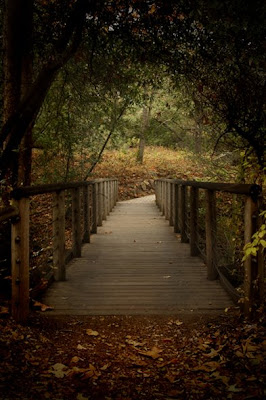 Sometimes, it is a struggle to come up with new posts for this blog. Quite often I will upload a photo into a blog draft because I want to use it, but it doesn't seem to fit at the time, so things just sit for a moment. And sometimes I will stumble onto an old photograph that I instantly know is the photo for my next post. Looking at this photo the other night, I finally had something to write.

As humans, bridges are an inherent part of our lives. They are used to cross obstacles that we could not cross otherwise.
Once in the High Uintas, I had to hike several miles out of my way to get to a bridge because the certain stream that I had to get across was to swollen.
But then there are things that happen in our lives that cause us to change our whole lives. These are also bridges. Bridges from one state of being to another. In Hebrew, the number 100 had a interpretive meaning that meant "passage from one side to another". In each one of our lives, there are things that serve as a passage to the other side. We arrive on the opposite banks a different person, with different views, purposes and lives.
For me, one of those things was my trip to the country of Turkey in 2005. When I booked my trip, I didn't even own a camera that worked. My old Cannon SLR had been broken for seven or eight years. I occasionally borrowed my sisters camera and took a few pictures, and that was about it. Sure, I had loved the subject of photography since I was a kid and back then I had obsessively poured over photography magazines and books. But as an adult, those dreams had been put to sleep and I wasn't really into it. I certainly wasn't very good at it.
Before I left to Turkey, I bought a new Nikon N80, a new tripod, and 40 rolls of pro film. In ten days, I shot about 35 rolls of film. Out of that, I walked away with about 10 shots that I considered good at the time. My trip to Turkey changed my view of the world, and it turned me onto international travel; but even more importantly then that, it got me to buy a new camera. It was so far away that suddenly, I felt that I could justify spending the money.
My pictures of Turkey ultimately led me to undertake the Sharsmith Project, which was really where I actually became a photographer. During my days and nights on that project, something inside me changed on an artistic level. And all of those things have led me now to publish this blog, and I don’t know where it will end, but I feel like it is just the beginning.
Turkey was a bridge that among other things, connected me back to deep dreams from my childhood. It changed me. At the time, because of work and other things, I wondered if I should really go. Deep inside though, I felt like I HAD TO GO, and it turned out to be a straight 100. If I had chosen not to go, who knows what life would be like right now, but I wouldn't be the same person.
What are your bridges? If they are staring you in the face, walk across them...
------
This photo was taken at the Santa Barbara Botanical Gardens, the same day as "The Grandfathers"...
Posted by Alma at 10:48 AM