In memory of Lorin G Naylor... 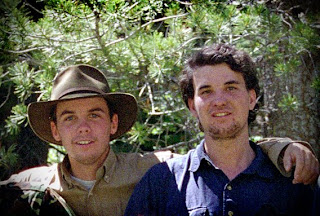 Last Tuesday morning, I got a phone call telling me that my brother Lorin had passed away. I was across the country at the time, and I was flying back to Salt Lake that day. The rest of last week was spent with funeral arrangements, burial plans, and spending time with family.

This picture is of Lorin and myself a few years back on a camping trip, and Lorin is the one on the right. He was two years older then me and we grew up together, sharing a bedroom and working together. Our father had a passion for moving, and one time there was a greenhouse that Lorin and I tore down and rebuilt in three different locations across the United States. He used to put his earphones on with his Walkman while we worked and I would have to yell at the top of my lungs to get him to hear me. I can still hear him singing, "...cold as ice, your willing to sacrifice..." while I was yelling and trying to get his attention.

Then there was the time that he and I stayed for a week by ourselves on a ranch we were building out on the Utah/Nevada line, near a small town called Garrison. A hundred miles out in the middle of nowhere, I swear that the wind never stopped blowing there, and it was cold. Lorin and I stayed in a small trailer for a couple of months. But the week that I mention is one particular week when we were supposedly preparing to leave the place for the winter. Our parents left for a few days and Lorin and I stayed out there to winterize everything. That included us sheetrocking a small building. Without scaffold. Or real ladders. Instead of a scaffolding, we used straw bales and we moved them around the building to stand on while we sheetrocked. Short as I am, it took at least two bales to get me tall enough to do the ceiling. It was the most frustrating job ever and it's amazing that we didn't kill each other before we finished. We cooked for ourselves and in some ways, we had a grand time. We had no phone, and our only means of communication was a ham radio that we had set up.

Lorin loved guns, and while we were out there in that remote place, we snuck out with our father's 38 special pistol and went shooting. And then there was the time that we thought we would be adventurous and we followed the stream about 5 miles to the nearest ranch. We got as close as we dared because we didn't want the ranchers to see us.

While we lived in that area, there was a period of time when we would go haul hay a couple of afternoons a week. Someone would drive Lorin and I into Baker, which was about 20 miles away and we would load up our small trailer as high as we dared with hay bales. The old rancher taught me how to run the scales, and we would usually stop and get ice cream on the way home.

Good times. If a few small things had been different, things might not have ended this way, but I suppose that it is pointless to think like that. In so many ways, he just wanted to be accepted and recognized. I didn't take many pictures of Lorin, it's sort of sad really.

When we sat down to write the obituary last Wednesday, I came up with some stuff but it was too long and complex. However, my mom liked it and asked me to finish it and read it at the funeral. Some of it is pretty cryptic, and it won't make a lot of sense unless you know our family, but a lot of people asked for a copy so I am posting it here.

Simplicity is a word that comes to mind. He was childlike, and might have done better in an era when life was simpler.

To see who Lorin was, we have to try and step into his shoes. The shoes of a man that had experienced horrible things, had seen horrible tragedies. We must step into the shoes of a man that loved simply, yet deeply; and whose daughter Kalliann was one of the most important things in his life. We must see a man that had the dreams of ranching and gardening. A man that would have appeared un-religious, but had deep religious roots that he would frequently reference back to.

At face value, he was a hard guy. A person that had made choices in life that he wished he had not made, and that made life very difficult for himself. He was a man that had personal demons that were a constant struggle to him, that he wanted desperately to overcome. “Don’t ever do what I have done”, he would say.

Lorin had a core group of people that deeply cared for him and stood by him. Starting with his mother, who worked tirelessly to help him, especially in recent years. Then his brother Frank, who talked with him endlessly and tried to help him as much as he could. His employer Mark Tyson, who gave him a place to stay, and many other counselors and friends that looked out for him.

If we could step into the past for a minute, we would see Lorin perhaps as he truly was. We would watch him play board games as a child, vigorously shaking the dice with both hands. Or we might see him playing with a toy truck, and using lincoln logs to build a miniature cabin. Later on, we would see him as he became obsessed with well drilling. And then we would see how he would pour over hunting magazines, and memorize ballistic charts. We might see him pray, openly and freely to a God that he deeply believed was listening. And lastly, we might see him as he sat on his couch, and watched a TV cartoon with his little girl.

As a family, we would like to say: Would to God that his choices had not separated him from us. We would like to take him and tell him that we do care about him, and then we might ask the question: Do you realize that we will miss you? And lastly, yes last of all, we would whisper to him: “Lorin, we love you”.

Somewhere, far away on a white shore, in a place more beautiful then you or I can imagine, a young man walks into a new realm. His scars are gone, and he walks differently, in wonderment of his surroundings. As he looks around, he is approached by three men. The first smiles and says “hello” with an unmistakably German accent. The second, who is a bit shorter, with a small build, and dark dark eyes, smiles from the corner of his mouth. He embraces the young man. And then the third comes forward. He is tall, with a curl in his hair and deep brown eyes, he takes the young man in his arms. “There’s some things we need to teach you, and some work you need to do, but first... (and he smiles with that smile that only he can), we need to sweeten you up...
----- 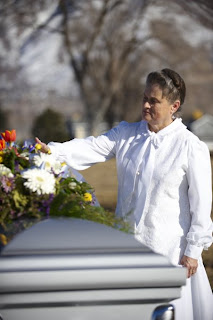