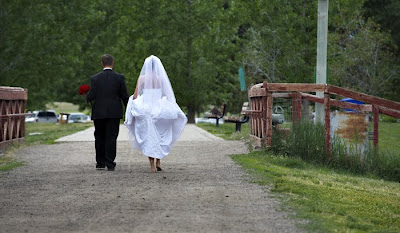 That's how long it took. Four minutes and four seconds elapsed between the moment that the bride handed the bouquet to the first bridesmaid, and the time that the person conducting the ceremony presented them to the audience as "Mr and Mrs.".

Later on, as I sat and thought to myself, I was quietly amazed. So short a thing for such a significant agreement. I found myself thinking that it should seem more ceremonious, or something.

And then I thought further about it and I realized that the commitment they had just agreed to had been happening slowly for a long time. Indeed, it had started when they first met, and had progressed all along. The agreement had been slowly happening for months. Every step they took had affected one very short, but dramatic outcome.

I dunno. It makes one think and wonder a bit. What are we leading towards every day of our lives?
Posted by Alma at 2:23 PM