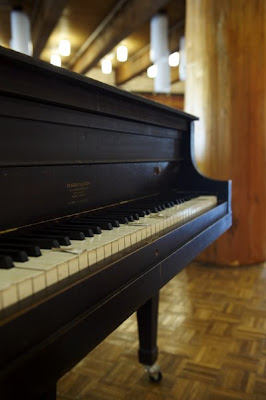 Located in Seattle along the banks of Puget Sound lies Discovery Park. The park is a sprawling 534 acre natural area that has the certain tranquility about it that we discover when we visit a natural area in the midst of a spralling metro.
Standing on 20 acres within the park, is the Daybreak Star Cultural Center, which is a conference/community center maintained and managed by the United Indians of All Tribes Foundation.

It was a beautiful spring day, and I had been wandering through the park. The sun was out, but it was filtered by a light and thin cloud layer, almost like a haze of sorts. The effect was a very pleasant softening effect on the light. There was little or no breeze that day, and the grass seemed to glow with a strange sort of florescence that was radiating from the inside out. The trees were beginning to bud, and one could tell that the whole area was about to burst in a magnificent display of the wonders of nature as spring emerged.

I wandered into the Daybreak Star Center, and there in the hallway was an old piano. It looked rough, and I went to it and plunked a couple of the keys. It sounded old, and probably way off tune, but I had the sudden desire to play the old piano.

I wandered towards the back offices until I found some people, and asked them if I could play it. The old native gentlemen looked at me sort of strangely. "Sure" he replied.

The piano bench had been confiscated, so I borrowed one of the guest chairs that was sitting at the entrance. I sat down and tentatively fingered the keys, letting myself feel the roughness of the instrument and the energy that it had acquired over the years of its use. Doubtless, it had seen many faces, and it was probably donated to the center by some kind soul that could no longer play it.

I began a song. A simple tune, no doubt repetitive, and known only to me. The music came from my soul that day, a sort of melancholy sadness perhaps evident in the music. Visitors wandered through, looking at the various pieces of art on display. I paid them no mind. It was about me, the piano, and the expressions of my soul.