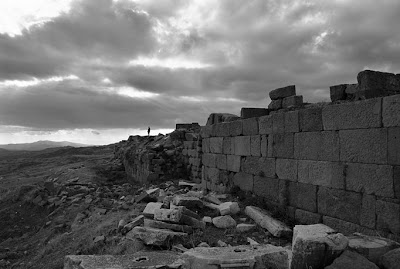 As I looked over the city ruins, I wondered, who had walked here? Who had lived, loved, laughed, and cried? What happened to them? Forgotten and lost, who had they been, and what had they done while they were here?

---
This is my first post that includes a photograph from my trip to Turkey in 2005. It's a neat place, with a lot of neat ruins. Everywhere. I'd really like to go back and spend some quality time with the light in some of those places, but I wouldn't want to be on a tour again. I'd have to be on my own time. You know the cool thing? That person just wandered out there as I took this shot. I didn't pose that, and I don't know who it was. I never even realized it until I got home. This shot is nice in color as well, but has a much different feel.
In 2007, at an international competition, PPA found this print "not worthy of a merit." Sort of surprised me. That's when I decided that I was going to have to ignore PPA's opinion on things. I haven't bothered to submit anything since. This was shot with film on Fuji Reala 100 (not the best), so maybe a better scan would have helped. I dunno.
Posted by Alma at 12:11 PM