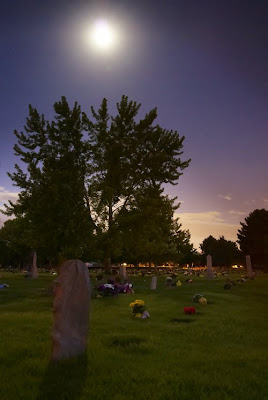 I went to another funeral Saturday. It was the funeral of a little boy who was the son of some friends of mine. His father and I used to go skiing together. Over the years, we have had good times, and many pleasant discussions. It seemed strange for me to be at some event where I wasn’t so involved in the coordination aspect. Usually, I am so wrapped up in trying to make sure that everything is happening like it should be that I am more consumed with those things then in just feeling the event.
But this time, I just sat there, and I listened to what they were saying. I listened to the songs. The little children singing, and adults singing, the dad talking. I watched as the people wiped their eyes, and I thought to myself about losing people. I thought about what it is like to experience loss. I thought about people saying goodbye.
I watched from the back of the room as they closed the small casket. I watched the mother, overcome in her grief. It was tangible, like I could feel, touch, and even taste the overwhelming sadness in the room.
Later on, at the cemetery, I wandered over and stood next to the friends and family that were waiting for the Hearst to arrive. I shuffled around a bit, and looked at the dead, dry grass. I thought about the mom and dad of the little guy. I thought of how they would miss him, about how his little bed would be empty now, his stroller would sit idle. No more blankets for him, no more songs to sing, or to hear.
I bent down and picked up a dried seed pod that was laying on the dry grass. It started to break apart in my fingers. Dead.
Sure, there was little green shoots under the dry grass. And sure, there was a feeling of spring in the air, but who cared that day? I decided I didn’t want to look for the green shoots of grass. It was all swallowed up by the sense of loss that was so heavy in the air.
The Hearst arrived, and I watched as the Dad, Mom, Grandmother and Uncle carried the small casket across the open space to the grave side. I watched as the little brother clung to the grandmothers other hand, and stumbled along. We gathered around for a prayer, and then it was over.
I watched as mothers and fathers, brothers and sisters, friends, and family all gathered around; hugging the mom and dad of the little guy that had passed on. People trying to convey their sympathy, their sorrow. People wishing that they could make the hurt go away. People wondering what to say, when there isn’t anything to say.
The dad walked over to me. “I’m sorry,” I said quietly. And the air was filled with an awkwardness. I looked back down at the dry dead grass, and he moved on to talk with other people. I shuffled away...and I thought to myself about something my sister Naomi said once: “You still miss people” she said, “Everyone says it’s happy because they are in a better place.” “I don’t care.” She continued, “...it’s still sad, and terrible, and I still miss them.” She was right, and that day, it seemed all to real.
As I walked across the cemetery, I thought of my own family members buried there. And I thought of one lone grave, far away, that I can't visit. A light breeze brushed my face, as though it wanted to comfort me. "No", I told it decisively. I was not interested in being comforted.
“Move on” people say. “Whatever”, I reply.
I thought more about what Naomi said as I left. She’s right. It’s just hurts. It probably always will.

----
This shot was taken as a part of the Memorial Day series that I was working on a couple of years ago, and it is the cemetery where my family members are buried.
Posted by Alma at 4:06 PM