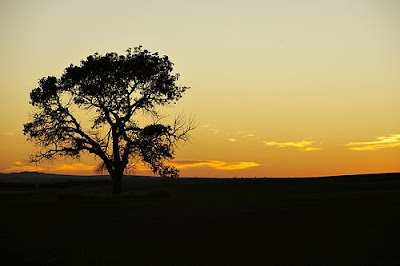 This was taken a couple of miles south of Wounded Knee, South Dakota. I have been studying the Wounded Knee Massacre for a couple of years now. I took this picture, stopped by Wounded Knee and then drove the rest of the night to get where I was going. That's why the strange title.
In the show Thunderheart, a young FBI agent gets assigned to investigate a murder on the Native American reservation. Although he is half Sioux himself, it is a fact that he is not proud of and does not readily acknowledge. Once on the reservation though, strange things start to happen and his roots start to haunt him. He starts seeing things, and having dreams. At one point he has a vision where he is running with the "Old Ones" at Wounded Knee. He begins to sense that there is something more powerful at work, and that he has something important to accomplish.
By the end of the story, he ends up awakening to the fact that his blood is something that he cannot escape from, and he ends up reaching for, and then embracing his vision. He is offered money and power, but he turns away from them and decides to embrace honor, honesty, and follow his vision. He looses his job as an FBI agent, but he leaves the reservation a much different person. He no longer suffers from the same insecurities. He no longer clings to the material things that he once did. He leaves with the feeling about him that he knows what he is, who he is, and that he is not afraid of it any longer.
I suppose that in telling this story, I am emphasizing the need and the power of personal vision. I will even go so far as to say that it is the only thing that can create lasting, positive change.
Posted by Alma at 5:30 PM